I'm not sure how I stumbled onto it, but I was reading about an urban legend from London in the early to mid 19th century, Spring-Heeled Jack. Depending on who was telling the story he was either an actual demon or just a dandy gentleman dressed in a devilish costume. In either case, he could jump over high walls and gates (hence the 'spring heels') mostly for the purpose of scaring lone travelers in the dark of night.

From the newspaper and magazine illustrations of the time its obvious that the artists had fun drawing him, each with their own twist on the character. I especially like the ones that make him look like a Victorian Batman prototype rather than a monster. I've always loved the hand drawn designs of periodicals from that time so I made my own Spring-Heeled Jack newspaper spread: 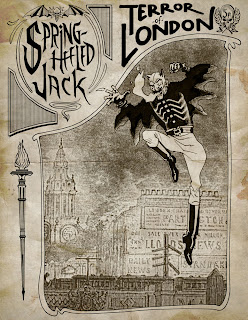 Love it! Definitely a fun character for redesign.