I take the train to work everyday and I use that time to make up for years of not reading by plowing through as many books as I can.

Right now, I'm reading "Jack London in Paradise" by Paul Malmont. His first book, "The Chinatown Death Cloud Peril", is one of my favorites. He seems to enjoy taking his favorite writers and dropping them into the types of stories that they wrote. I'm sure it's been done before, but I really enjoy his approach to it.

I never knew much about Jack London before starting this book, so I've been reading a bit about him and looking at old photos online. I gave myself 15 minutes to knock out a sketch of him and another 15 minutes to 'antique' it a bit: 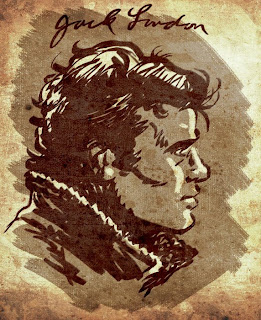 I'm slowly chipping away at inking the group sketch of pulp characters I posted a few days ago so I thought I'd post a little work in progress detail of the Spider, the Shadow and most of Doc Savage's widow's peak. I know that Doc wasn't portrayed that way until James Bama started painting the covers to the reprints in the 60's, but that's the way he'll always look to me:

I Love a Mystery

I get tired of listening to music while I work, so I've started listening to some of the old time radio shows. The internet archive has a huge collection, but some of the files are in such bad shape they aren't worth listening to. Fortunately, there is an OTR fanatic who runs a site called Broken Sea Audio and one of the things he does is restore old shows so that they can be enjoyed again.

Lately, I've been listening to a show called 'I Love a Mystery' which is more of an adventure show than a mystery show done in a very pulpy style. The serials have great titles like 'Temple of Vampires' and 'Pirate Loot of the Island of Skulls'. The thing I realize as I listen to these shows is that maybe radio dramas were the ideal format for pulp stories. I've tried reading some of the old books and while I love the concepts, I can't get into the writing. Same goes for the movies, even the modern ones like Sky Captain - nice visuals, but not quite right (though The Rocketeer was great, as was the Rocketeer comic book). These radio shows somehow hit the marks that the books and movies miss. I suppose it has something to do with the concept of the 'Theater of the Mind' as they used to say in the golden age of radio.

Anyway, I was inspired to make a fake vintage newspaper ad for the show: 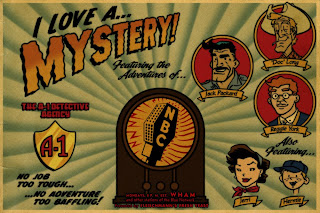 One interesting thing about these old shows is the advertising. This show was sponsored by Fleischmann's yeast which wasn't being advertised as a baking ingredient, but as a health food. You either mixed it into tomato juice to make a 'vitamin cocktail' or just ate it straight - blech!
Posted by Pav at 10:47 PM 4 comments:

After putting in a lot of hours to finish a big project at work, then taking a short but much needed vacation, and finally slogging through the inevitable post-vacation slump I'm getting back to being productive again.

I spent most of last weekend cleaning my home studio and in the process found a pile of old, half finished artwork. Since they're all pretty far along and won't require any major effort, I'm going to try to finish them up and hopefully build up momentum towards some of the other, bigger efforts I'm trying to get off the ground.

Up first is a sketch I drew when I was reading a lot about the history of the pulps - just a goofy group shot of some of the major and minor characters of the era: 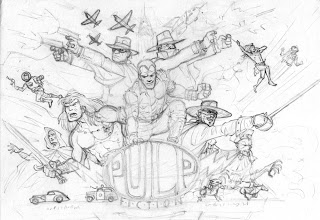 I'm going to clean it up, ink it and probably color it too. I'll post the steps as I go. I also need to go back and figure out who all the characters are - there are some pretty obscure ones in there.
Posted by Pav at 9:27 PM 1 comment: