Still making incremental progress on this one - fixed the sleeve and finished most of the torso. Getting the shirt to look like suede without using texture overlay or fancy brushes is kind of tricky. I'm going to try to overlay some blotches of color to age it and make it look less monochrome: 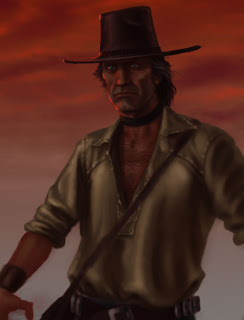 I was at the Wizard World Chicago comic book convention yesterday and was talking with the friends I was with about drawing comics 100% digitally. Just for fun, I threw together this Hulk sketch today start to finish in Photoshop. The inking is not as smooth as real brush work, but I think with some practice and modifications to my style it can work. The hardest part was sketching in the initial layout. There's something about looking at a drawing on paper that gives you a better perspective on design and proportion that you lose going digital (for me anyway).

It definitely went a lot faster than doing it traditionally, but I don't know if the drop in quality offsets that: 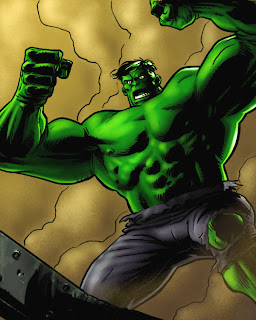 Not a lot of progress since last time - just working my way down the torso. The chest is done, but there's still a lot of work to do on the shirt. That right sleeve is going to be reworked since the wrinkles aren't working for me: 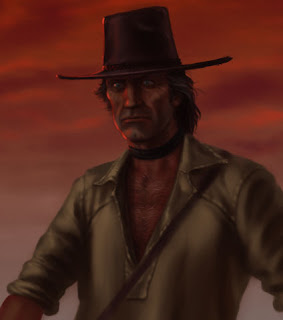 After having a lot of problems with my home PC I ended up getting a laptop, which I've finally got setup for doing artwork on. Since I hadn't worked on this Roland piece in a while I decided to take the opportunity to redo what I had done on the character. He wasn't matching my mental picture of him and I wasn't really working on him in a smart way. First thing I did was to rough in some local color and very simple lighting to define volume: 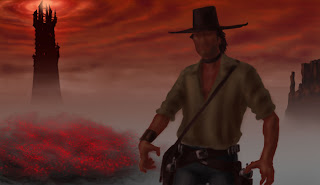 Once I had that in, I went ahead and started working on the head, which is what really bugged me about the previous version: 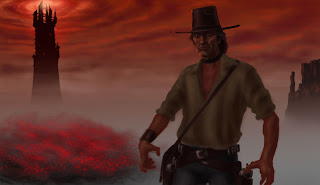 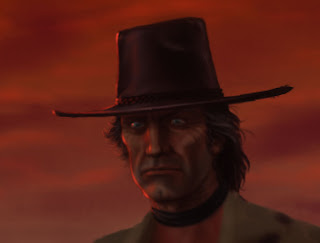 I'm a lot happier with that - it's hard to avoid Clint Eastwood-isms in portraying Roland, especially since Stephen King describes him as looking like Eastwood, but I wanted a face that matches the voice I hear when I read the books. He's far from perfect, but better than where I was before.

In case I hadn't mentioned it before, this is all done in Photoshop.
Posted by Pav at 10:03 PM No comments:

This month the Siskel Film center in Chicago is running newly restored prints of many of the film noir classics from the Fox library. I saw Night and the City last weekend and it was great to see it on the big screen. The movie is about a down and out hustler in London trying to make one last grab for the brass ring by horning in on the wrestling promotion racket.

Richard Widmark was great, as usual, playing the frantic loser who won't face the fact that he'll never be a big shot, but the real highlight of the movie for me was the grudge match between the old master wrestler, Gregorius and the reigning king of the ring, The Strangler. Gregorius was played by Stanislaus Zbyszko, a real old time wrestler who was 71 when the movie was filmed. The scene was very visceral, filmed in what felt like real time with tight camera shots, long cuts and no music or sound effects.

It was a great film overall. I love the way that old movies were able to throw in some humor without losing the sense of peril or emotional intesity.

Hopefully, I can go and see some of the other movies before month is out. 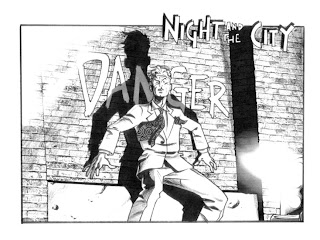 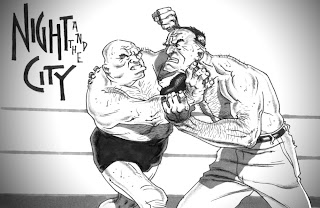 King of the Sea

Quick sketch after a water cooler discussion on who would win in a fight - Aquaman or Sub-Mariner: 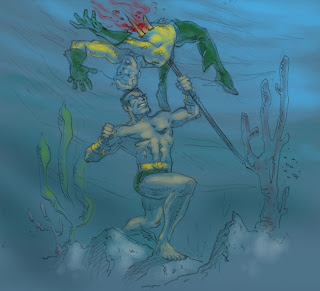