One last movie sketch, this one of Sam Peckinpah's first films, Major Dundee. Charlton Heston plays the title character, a Union officer who leads a pack of rag tag volunteers and Confederate P.O.W.'s across the Mexican border to track down a band of Apache's who have been raiding forts and settlements in Texas.

There are lots of interesting characters all played by great actors in this one, but I really liked James Coburn as the scout who tracks the Apache for Dundee. This seemed like a part more suited to Lee Marvin, being a gruff, scraggily bearded frontiersman, but Coburn played it well. The fact that Coburn was so damn skinny helped. Usually when an actor hides one of their arms under their shirt to play an amputee it's very obvious and looks weird, but it actually made Coburn look beefier and more heroic: 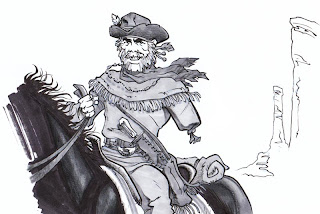 Last weekend was great for catching up on some of my favorite old movies on TV. After watching The Big Heat, I caught some of the James Bond marathon on BBC America. I just watched bits and pieces, but saw three different Bond films in one day.

The last one was Dr. No. - still one of the best Bond movies despite being the first. Even though it had a crazy villain with metal hands, a cool hidden lair in the Caribbean and membership in a secret society called S.P.E.C.T.R.E. it will always be remembered most for introducing the first Bond girl. The first time we see her, she's walking out of the ocean wearing a white bikini complete with knife belt. The only thing that ruins the scene is that she and Bond both sing "underneath the mango tree", a song that's heard about 10 times throughout the movie. The producers definitely got their money's worth out of that licensing deal: 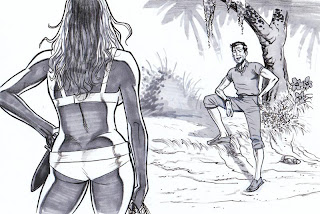 I watched one of my favorite film noir movies this weekend - The Big Heat. Glenn Ford plays an honest cop who doesn't know when to back off in investigating the suicide of a police official with ties to the local crime czar. I think I like it so much because it's very simple but very well done. The story is straight forward, but it hits all the right notes and has some pretty intense stuff for the time. I highly recommend it if you like that sort of thing: 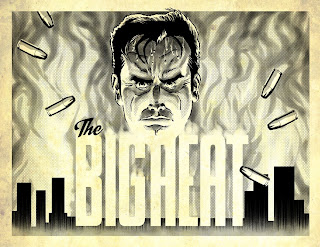 Getting Back Into the Swing of Things

I've been busy/distracted lately, and whatever free time I've had has been spent working on/learning about writing, so I haven't had much to post. I am trying to get back into regular sketching though.

Here's a quick study from a movie still, just messing around with basic Photoshop brushes and working with a limited palette. Not the best likeness - it looks more like Robert Redford than Roger Moore. About 45 minutes of work: 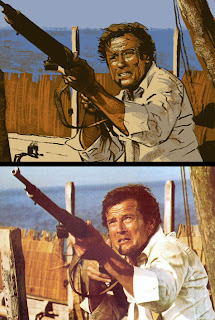