I read that yesterday would have been Jack 'The King' Kirby's 93rd birthday if he hadn't already gone off to Valhalla to hang out with Thor and the Warriors Three: 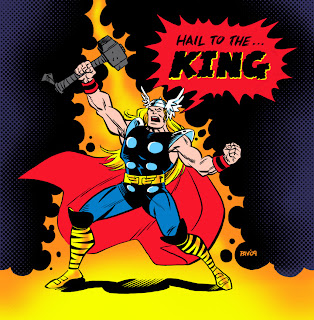 I didn't really come up with anything worth posting at last week's Drink n' Draw, so I thought I'd post a few other things I've worked on this summer.

Way back when I was first getting my start as an artist - probably around 1994 - I drew an illustration for the cover of a novel called Alligator Alley, which you can still get on Amazon. It's a fun neo-noir kind of crime story written by Ken Coffman and Mark Bothum. They were very cool to work with and generous in giving a greenhorn like me a chance to do some work for them. Out of the blue, Ken got in touch with me earlier this year about helping him out with some new projects he was working on, and I was glad to help him out. Ken is not only publishing his own books, but is also starting up imprints to help other writers get their work in print, which is impressive since he does all of this in his free time.

The main character from Alligator Alley is a guy named Glen Wilson. Glen is a sort of slippery anti-hero of questionable morals who bears more than a slight resemblance to James Woods. He's gone on to further adventures in other books, so Ken asked if I could draw him a B&W logo for the books that could be used in a frontispiece to tie them all together. He suggested a variation on the skull & crossbones with Glen's head in place of the skull. I thought that was a cool idea so we ran with that: 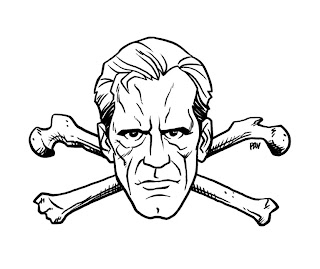 Ken has another book coming out this fall called Hartz String Theory and he asked me to design some logos for the two mysterious shadow organizations in the story. Not to give anything away, but the first group is a sort of ancient Illuminati type group, so I gave them an old fashioned engraved looking logo made up of the arcane symbols Ken said were important to them:

The second group is more of a street level militant band of anarchists, so I wanted to given them a DIY looking logo that could be stenciled onto walls with spray paint:

I'm not really a graphic designer, so it was a fun challenge and a nice change of pace to work on these.
Posted by Pav at 2:47 PM No comments:

Last night I went to a Drink & Draw session with some of the comic book artists that live in Chicago. It was a great group of guys and everyone made me feel very welcome. Hopefully, I can make it a regular thing.

I was lucky enough to sit next to talented artist and all around nice guy Hilary Barta who offered to ink what I was doodling. I wish had come up with something better, but Hilary made it look great anyway despite working in an environment totally unsuited to inking. Here's the Flash Gordon sketch we teamed up on: 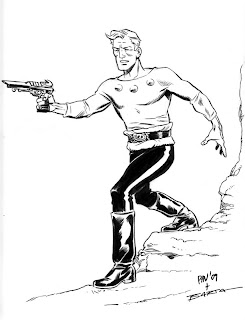 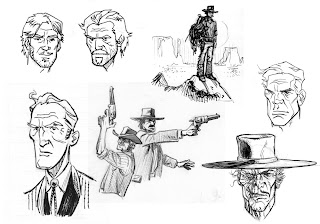