Still turning out some pages based on old stuff I have lying around while I do some more writing. This page is based on some old thumbnails for a story I started dreaming up about 15 years ago. It was going to be called Projekt Ultima and was a story about a team of Allied agents racing against the Nazi's to find the lost city of Atlantis. I knew even less about writing then than I do now (which still isn't much), so it was shaping up into something bigger than I could handle and I eventually gave up on it. I still feel like I have too much mental clutter from it to ever go back to it, but maybe that'll change someday.

This page wasn't actually from the story, it was something I drew up before I had the Atlantis angle worked in and is more straight sci-fi. Here's the original thumbnail: 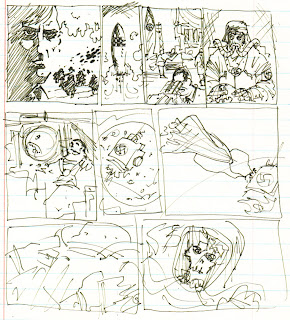 Here's the page I came up with based in it: 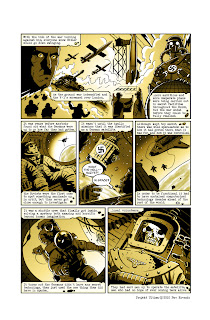 I made several attempts at coloring it and couldn't come up with anything I liked, so I just went with a sepia tone look that kind of matches the idea of this page being based on notes from an old file.
Posted by Pav at 10:07 PM No comments:

One of the old radio shows I listen to sometimes when I'm working is The Avengers. Even though radio dramas had pretty much run their course by the late '60s, BBC Radio was still churning them out for the South African market, where they were apparently still popular. That's where these Avengers shows are from. Anyway, here's a quick John Steed/Emma Peel: 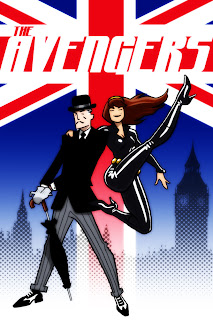